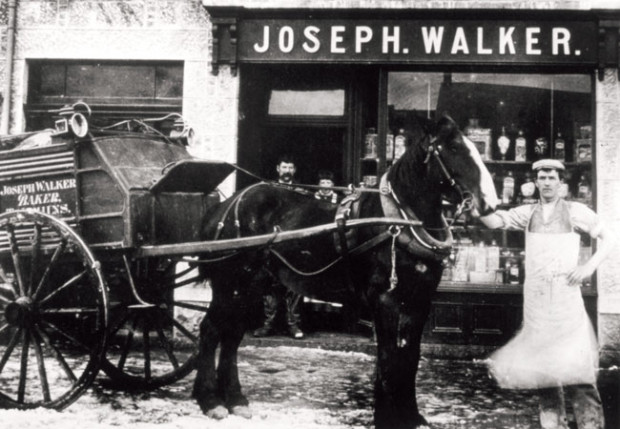 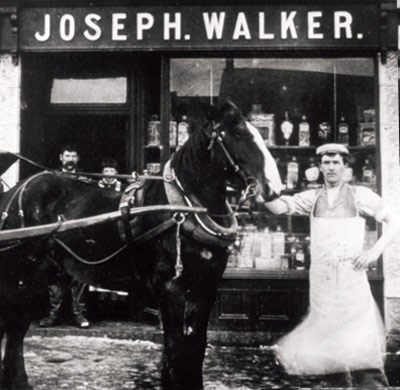 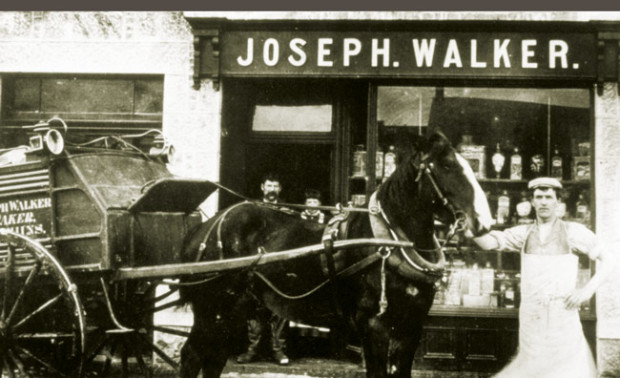 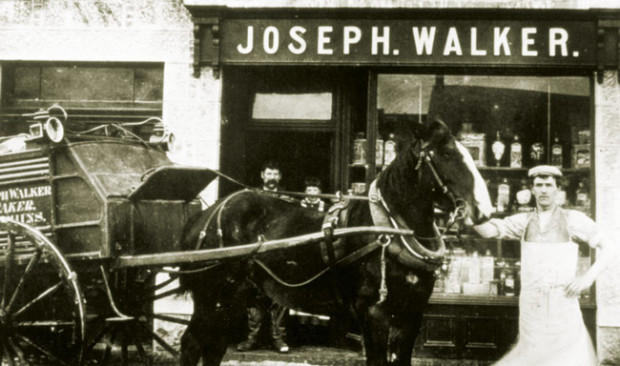 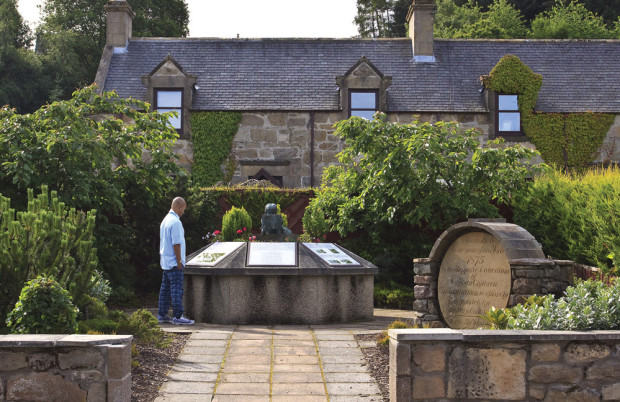 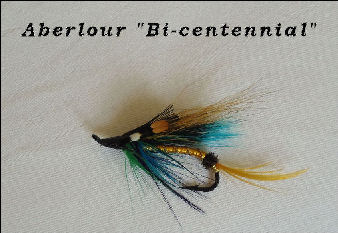 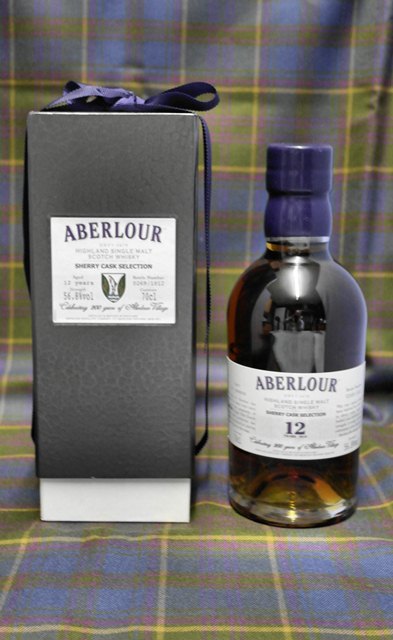 Many aspects of Aberlour’s history can be found where the High Street crosses the Lour burn. The pack horse bridge, built before 1624 leads to the old Kirk of Skirdustan (St. Drostan). The only part of this Kirk still remaining is the ivy covered gable wall in the cemetery. It was replaced by the present Kirk in the Square in 1812, after the old Kirk deteriorated to such an extent that one rather substantial lady member of the congregation went through the gallery floor and was left dangling by her armpits!

Bonnie Prince Charlie’s army crossed the Spey at Millford, at the other end of the High Street, in 1745 en route to Culloden. They spent the night camped at Knockando churchyard while the Prince stayed at Thunderton House in Elgin.

In 1812 Charles Grant, Laird of Elchies, founded the village of Charlestown of Aberlour. He granted feus with a few acres of land attached to promote industry, trade and manufacture. (In “feu holding” there is a substantial annual payment, in money or in kind, to the Laird in return for the enjoyment of the land.) The village was elected into a burgh of barony on 18th Jan 1814, giving the Laird trading rights. Some of the first homes were built from stones removed from the river bed. Water was supplied in 1865 and street lighting in 1866. In 1894 the inhabitants formed a “police burgh” governed by elected commissioners.

Aberlour is now more accessible as the improvements to roads and telecommunications have transformed life in the north of Scotland. The village is still self sufficient though in many ways, with significant local employment in the distilleries, shortbread and other (delicious!) product development, production, distribution, promotion and of course retail, the trades and on the estates. Over 10,000 visitors enjoy the distillery tours, fishing, walks and shops each year.

The history of Aberlour is fascinating, with tales that enchant and intrigue, including a Doctor’s life saved by the birth of a baby and the minister who was chased out of the village with shots fired at him and the bishop! The chronological history is available from the library and information is available on local websites. Monumental inscriptions can be accessed here.

To celebrate the bicentenary in 2012 of the founding of Charlestown of Aberlour, the Aberlour Community Association commissioned an Aberlour Tartan to be woven by Knockando Woolmill. The colours incorporated in the new tartan depict the sky, the grass which feeds the local black Aberdeen Angus cattle, wheat for the shortbread and barley for the whisky. (Sir George Macpherson-Grant of Ballindalloch Castle worked for almost 50 years from 1861 onwards to refine the Aberdeen Angus breed, and Mr and Mrs Russell maintain a pedigree herd at the Castle today.) The Community Association also petitioned the Lord Lyon asking for Arms to be granted to Aberlour. The leaping salmon in the new coat of arms reflects fishing on the Spey and tourism, and the ears of wheat and barley represent the farm crops used in whisky and shortbread production.

The bicentenary fishing fly also uses the colours from the tartan and is available in a beautiful brooch edition. 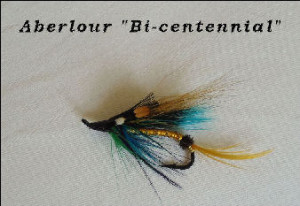 The Aberlour Bi-Centenary weekend of celebrations took place 13th to 16th September 2012. A large marquee was in place for the duration which hosted a number of the events.

Events started with a Community Concert which began on the Thursday evening with an opening address by James Walker, CBE followed by an evening of music from a number of performers including – performances from Aberlour Primary School and Speyside High School pupils, the Aberlour Pipe Band, Aberlour Reelers and Junior Reelers, Aberlour Parish Church Choir and friends and Ritmo drumming school. The even was very well attended.

Friday saw the Unvieling of the Bi-Centenary Cairn in the Square, cutting of the bi-Centenary cake and various other events in the village square, involving many school pupils. In the evening we had an excellent concert from Aly Bain and Phil Cunningham  who entertained us with their own brand of traditional music and stories.

On Saturday, Aberlour Orphanage and Aberlour Junior High School both held reunions where particpants had travelled from all over the world to be there. A number of events took place during the day and in the evening, in the Marquee, there was a Magic Show, followed by an evening of dancing featuring the Graeme Mitchell Dance Band playing ceilidh music and ‘Mustang’.

Events concluded on Sunday with St Margarets Episcopal Church being open for visitors, the Kiltwalk 2012 awards (Aberlour was the finishing point of the Speyside Kiltwalk in the summer) and a Songs of Praise service featuring the 3 local churches – St Margarets, Aberlour Parish Church of Scotland and Chapel of the Sacred Heart.

The Looking Great for the Bi-centenary award was won by Charlie Gammack and Ron Aitchison (Aberlour Heritage Centre at 77b High Street), Second was Sarah Nairn Anderson (Three Bags Wool) and third Sara Bains (Ewe and Me).

A time capsule to commemorare the weekend was buried on Monday 24th September in War Memorial in the square.  To round off the celebrations on Tue 9th October Prince Charles, The Duke of Rothesay visited Aberlour and went walk about.  He spoke to many well wishers in the area outside the Co-op before visiting Walkers High Street shop, C A Gammack’s and The Spey Larder.  He continued towards the church where he unveiled a mosaic made by the local children and settled in the church for a cup of tea with some of the locals. 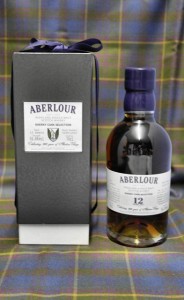 Aberlour was once home to hundreds of orphans, with their own school, farm, and church. The history of the orphanage is fascinating, and walking the history takes you to beautiful parts of the village you may otherwise miss.

The orphanage was founded by the Rev. Charles Jupp in a small house near the ancient pack horse bridge. This area includes the Aberlour distillery, the Lour burn and Falls, and the historic cemetery. Rev. Jupp was employed by Miss Macpherson-Grant, who completed the construction of Aberlour House and St Margaret’s Episcopalian church at the northern end of the High Street.

This classical mansion is now home to Walkers Shortbread and is part of a beautiful view across the Spey from Elchies. A History of the orphanage is displayed in the church. You can also see the marks made by the children in the pews, and the more formal engravings on the walls.

The way children were cared for evolved, and in 1953 Princess Margaret opened the new Orphanage Nursery School at the Dowan’s House (now The Dowan’s Hotel). Subsequently, a ten bed family home was set up in Keith in 1962 by the orphanage, to trial a new style of childcare. In 1967 the 160 children then resident in the orphanage were dispersed to family-type units through out the North East of Scotland. The work started by Rev. Jupp is continued by the Aberlour Childcare Trust.  The orphanage was closed and the buildings, estate and farm were sold.

Today, the orphanage tower remains at Tower Place near the High School, with an information panel and a statue of a girl. Information is also available in Aberlour Library.

Margaret McPherson Grant and the legacies of slave-derived wealth

Fill out the form below to signup to our blog newsletter and we'll drop you a line when new articles come up.